My wife and I took an exploring vacation to the beautiful island of Rota. Rota, like Saipan and Tinian, is part of the Commonwealth of the Northern Marianas. Rota is approximately the same size as Saipan but with a fraction of the people. The population of Rota is now around 3,000 and shrinking. We took off from, and flew over the WWII airfields that changed the world.
.

.
The "Swimming Hole" sure was a beautiful spot and looked so inviting. It is a large but not too deep hole surrounded by a lava rock reef to stop the big waves. The water is calm and warm with colorful small fish, perfect for the amateur snorkeler.

Caution: The "Bigfoot Burger" really is BIG and tastes great. It costs only $9 including lots of fries and was enough for my dinner and lunch the next day. 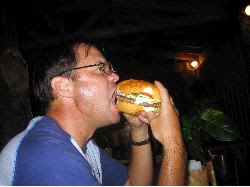 The "1930's Japanese Sugar Mill" is located near the port in the village of Songsong. In the 1930's until the Japanese military buildup of the islands began in the early 1940's, the Japanese had a successful sugarcane industry on the islands of Saipan, Tinian, and Rota and this is the only surviving sugar mill rubble from those three islands. The sugar mill shows the scars of WWII.
.

.
Here is another Japanese pre-WWII sugar mill train we found alongside a dirt road near the village of Sinapalo. 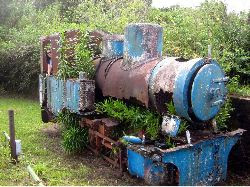 The "Bird Sanctuary" is a must visit when in Rota. It has a long walkway right on the side of a 300 foot cliff with outstanding views of the ocean and cliffs below. You are looking down on the top of the jungle with large birds flying around below and some high flying birds right at eye level.

"Taga Cave" is located right alongside Songsong village. It is a large open cave with cement sidewalks and stairs. This cave would have ancient Chamorrow history as well as Japanese WWII history. In more recent times this cave has been used as a typhoon shelter. It didn't take me long to find many Japanese WWII tunnels around the outside of this cave.
.

.
The ancient "Latte Stone Quarry" was amazing. At least 500 years ago the Chamorrow (indigenous peoples of the Mariana Islands) would carve these shapes out of rock. The rectangular stone was placed upright and the round rock was balanced on top of that. It is believed that the huts were then built on top of the latte stones. Rota has many latte stone village sites but this quarry would have been the largest. I see that the stones were braking as they were being removed, perhaps because the rocks were just too big to be used as latte stones. The quarry was then abandoned by the builders.
.

.
Latte stones can be found everywhere in Rota. This latte stone village site was right next to our hotel. 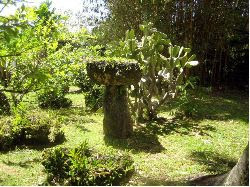 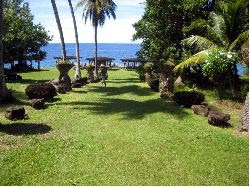 This picture was taken from the "Songsong Overlook". 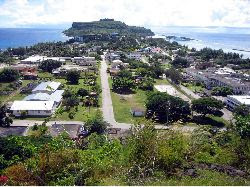 In the village of Songsong you can find this "Spanish Colonial Government House". This building dates back to pre-1914 and could even be a few hundred years old. 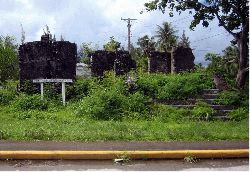 Rota was never invaded during WWII but the defending Japanese soldiers were prepared for battle. There are many "Japanese WWII Cannons" that can be seen today.
.

.
The Japanese WWII cannon below has an interesting modern story. It is right alongside a narrow road and the crank to move the cannon still works. If someone forgets to leave the cannon all the way to the side, as it is in this photo, then cars passing by will drive into it and brake their windshields. 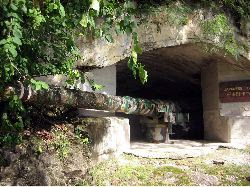 This is the "Largest Japanese Fortification" in the Marianas. It is in the cliffs overlooking the Japanese airstrip and was to be used to defend the airfield from the expected invasion. This fortification is a series of tunnels, bunkers, and pillboxes connected by a walkway dug into the cliff. The walkway is protected by a short cement wall which would have also protected infantry men and snipers.
.

.
Right next to the Rota Airport parking lot is a nice collection of Japanese WWII airplane engines and anti aircraft guns. 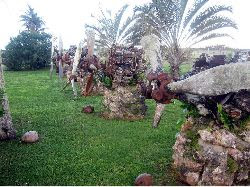 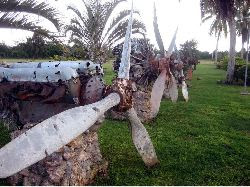 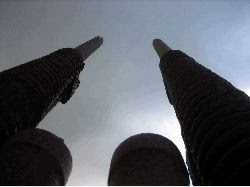 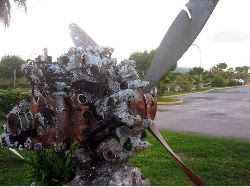 Unfortunately Rota, like Saipan but to a larger degree, has been hit by the economic crunch. Once beautiful public swimming pools and large hotels and mansions now sit abandoned and forgotten. Rota is a jewel in waiting for better times. This abandoned swimming pool is now home for many colorful ocean fish that must have washed in during typhoons. 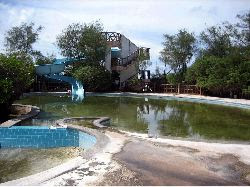 Rota offers a nice slow and peaceful lifestyle. We pulled over alongside the road just to watch the beautiful sunsets. It was better than TV. 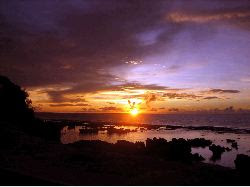 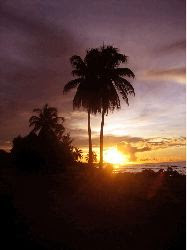 It looks like another nice island trip, Eric. I enjoyed the cave and cannon videos in particular. Nice work! Thanks!

Thanks. I sure enjoyed that exploring trip.

Been checking out your stuff here. I lived on Saipan 88-89 and 94-99. I first went out there on those ships you see offshore, and later worked for the airlines out there. I did some bonnie stomping out there myself. Loved Saipan. Also been to Rota, Tinian, Guam. Didn't get to explore Rota as much but did go there a couple of times. Not much there for sure. I just came back from Saipan visiting it after being gone for 13 years. Glad to see alot of my friends still there. Great job, loved your films.