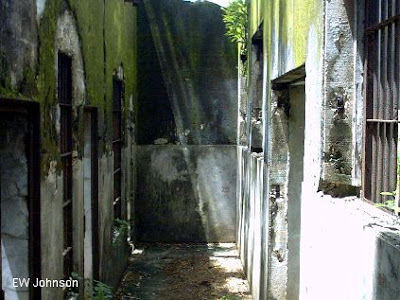 This Old Japanese Jail was used from its construction in 1929 up to the day the Battle of Saipan began. Part of the wall surrounding the jail still stands. The wall shows the scars of countless bullet holes and bigger blasts, perhaps from American tanks. Inside the walls are two jail blocks. The larger of the two is on the right with 16 cells and was used for the male prisoners. The smaller cell row on the left with 4 cells was possibly for the women. It is rumored that Amelia Earhart was kept prisoner in this building for the last months of her life. Between the cell blocks are the quarters and offices for the guards. You can still walk through the hallway connecting the jail cells and imagine how terrible the living conditions must have been for the prisoners.

If you have any photos of this jail before or during WWII please send me a scan. Thanks. 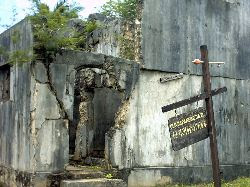 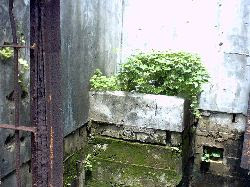 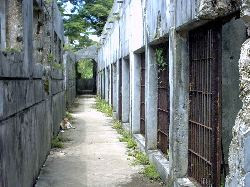 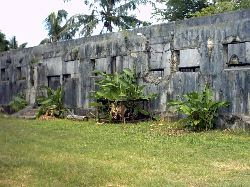 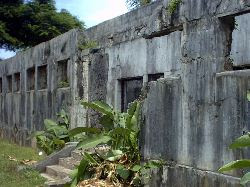 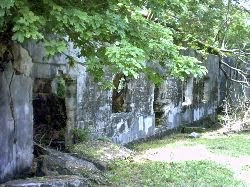 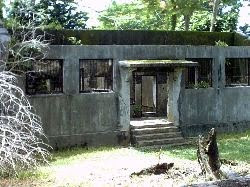 Small cell bolck. (Behind the goat.) 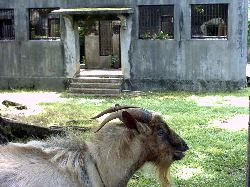 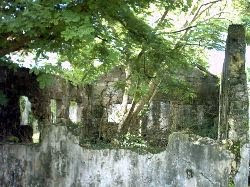 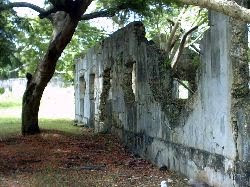 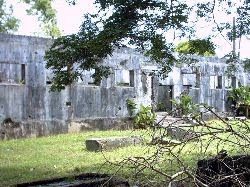 Tank blasts to what's left of the surrounding wall. 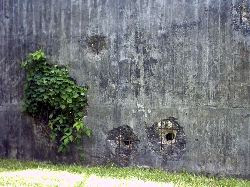 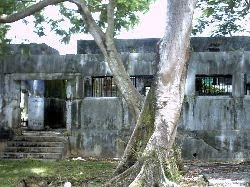 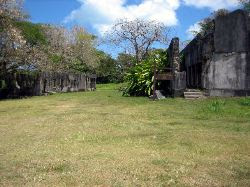 I believe a platoon of U.S. soldiers spent the night in the hallways of the Japanese Jail in the early days of the battle. It was easy to defend and a safe place during the vicious Garapan door-to-door fighting. That night they scratched their names and the name of their home towns on the hallway walls outside the cells.
"J.A. Beiser June 15 / 44" 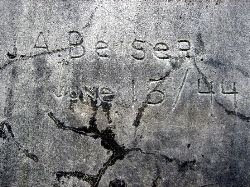 Update. With the help of my Flickr site I located J.A. Beiser and am in email contact with his son Dave. John Beiser was attached to the 4th Marines. The 2nd and 4th Marines attacked the beaches on June 15, 1944 and John was there. He didn't write his name on the wall on that date. That would be impossible, although I have run through many scenarios in my head over the years to try to explain how it could have happened. He knew that date was (and still is) important and he was proud to be a part of D-Day in the Pacific. I am also proud of him and the others in the 2nd and 4th Marines. John doesn't remember putting his name here but this will become his Saipan memorial.
"Bill Warner
Newark New Jersey" 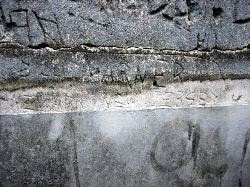 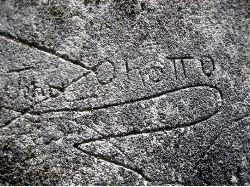 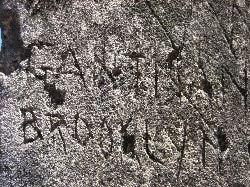 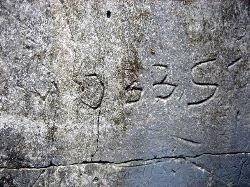 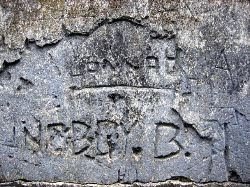 Japanese writing prisoners counted down the days on the inside cells walls. 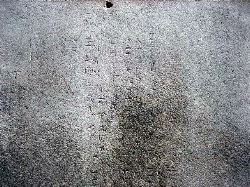 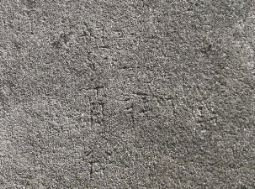 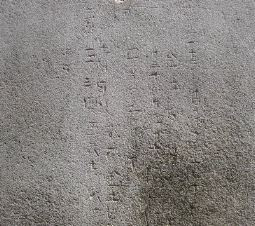 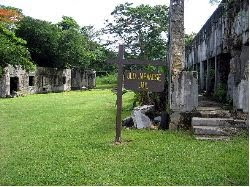 This is a 1920's Japanese map of the jail. The red writing is from my present day observations of what survived of the Old Japanese Jail. 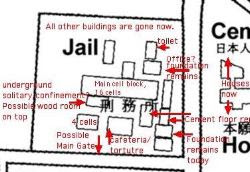 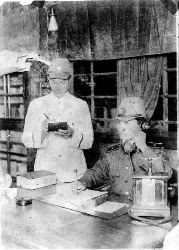 See below for notes on the above picture:
After a decade of searching, where many before me had given up, this is the only pre-'Battle of Saipan' picture I could find of the Old Japanese Jail. The photographer is unknown and most likely died during the battle as did the Japanese commander sitting at the table. After enhancing and enlarging the object outside the window I could see it was a cross from a grave at the cemetery that was across the street before WWII. Given the distance and angle and a pre-war Japanese map, I am reasonably sure I have located the foundation of this office. This picture was taken before June 13, 1944 at which time all of Garapan fell in rubble from American naval shelling.
Other interesting objects in this photograph:
The word on the phone: "Headquarters"
Written on the book in the hands of the man standing: "Police Notebook"
In the hands of the commander: an American pencil with an eraser. (Very unusual)
On the desk: an American 35mm film container. (That's strange)

How could they have gotten these items and perhaps even the camera that took this photograph?

In the early days of the Pacific War, a thousand miles south of Saipan, an American fighter plane pilot was shot down and captured by the Japanese. When American Marines arrived at this jail years later they found the pilot's recently (one day before) beheaded body in the courtyard and his flight jacket in a cell. Could these be his items? Could he have been the one who took and developed this photo?

Others believe Amelia Earhart and Fred Noonan were also brought to this jail. Could this be the connection to those items?

I could keep going but if you read this far then I congratulate you. I debated for years whether I should put this picture and story on the internet. Let me know what you think. 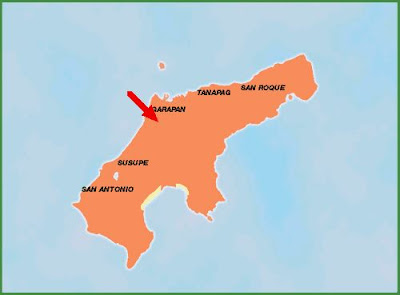 now that brings back memories, but it was all overgrown with that 'jungle' stuff(a specific species of tree that the USA sowed on the island to impede the Japanese and it probably STILL is everywhere!)

Yes, the tangan tangan tree is still everywhere. A cleared area can turn into a jungle in a few months.

Man, amazing. Great pictures.
Congratulations, must be incredible explore places like this.

Thanks, I sure enjoy exploring this island.

The Tangan Tangan wasn't sown to impead the Japanese but rather to establish a "post battle" root system to prevent mass soil erosion. After all the bomb and shelling, many places on Saipan were left quite barren. In retrospect, it was a poor choice for plant usage...highly aggressive and never a natural part of Saipan's ego system. It's intruded to the point of botheration...and a boonie stompers headache (among other things it's done)

Hi Alan, They sure are bothersome today. I once tried to get the approximate date of the bombing of Saipan with tangan tangan seeds with no luck. It was sometime after the battle and before the camps were closed. Chamorros from the camps mentioned that the tree was an improvement as it was a quick growing firewood and good to feed the cows.

I have done a lot of research on this old jail. There are a few mistakes by the author in his blog comments which are understandable.

There were several American flyers that transited through this jail on their way to POW camps elsewhere - mainly Japan or Manchuria.

There is witness testimony that four American flyers were confined here possibly a month before the invasion (June 15,1944). These Flyers were taken to the "hills" by the Japanese military during the soldiers’ flight away from Garapan. The flyers were last seen alive in the custody of the Japanese soldiers near Mt Tapochau by Chammoros who were also fleeing the fighting. Nothing is known of the flyers fate.

Two Americans flyers were captured during the pre-invasion bombing of Saipan. They were both brought to the jail and kept in separate cells. One of them was killed in his cell by friendly fire -American strafing during the attack. The second prisoner was taken outside by the four Japanese civilian administrators of the jail. They attempted to behead him with a sword but failed. While still alive, but near death, they ordered a native prisoner from Palau to burn his body. The Palauan said he dragged the wounded flyer over to another area of the jail grounds and did not want to burn him because the man was still alive. So, he waited till he died and then burnt the body before fleeing to the hills himself.

In 1944, the jail was run by civilian Japanese police personnel under Japanese military control. Are you sure, this really a picture from the jail or possibly from another military location on Saipan?

You can contact me for further information if you are the blogger of this web site
lgkinney@msn.com

http://www.seabee-rvn.com/They-Served-Before-Us-WWII/Saipan-595th-CBMU-Manuel-Rosa/i-PHMFSpK/A
http://www.seabee-rvn.com/They-Served-Before-Us-WWII/Saipan-595th-CBMU-Manuel-Rosa/i-PHMFSpK/A
two picture of what old Japaneses jail looked like after it was seized the marines in ww2.

Have you seen the latest news on Amelia Erhardt? Maybe this is the jail she was in?

Great photos. Do we know the ID of the Commandant? There were war crimes trials for some of these guys. My half brother Jack Combs told me about the trials, or told me some gruesome details. Looking forward to the History Channel story tomorrow.